A thrilling journey deep into the heart of language, from a rather unexpected starting point.

Keith Kahn-Harris is a man obsessed with something seemingly trivial – the warning message found inside Kinder Surprise eggs:

WARNING, read and keep: Toy not suitable for children under 3 years. Small parts might be swallowed or inhaled.

On a tiny sheet of paper, this message is translated into dozens of languages – the world boiled down to a multilingual essence. Inspired by this, the author asks: what makes ‘a language’? With the help of the international community of language geeks, he shows us what the message looks like in Ancient Sumerian, Zulu, Cornish, Klingon – and many more. Along the way he considers why Hungarian writing looks angry, why no one actually speaks Arabic, and the meaning of the heavy metal umlaut.

Overturning the Babel myth, he argues that the messy diversity of language shouldn’t be a source of conflict, but of collective wonder. This is a book about hope, a love letter to language.

Want to buy this book outside the UK? Check out the links on the publisher’s website.

Join in the adventure!

On the Additional Content pages you can find  a continually-updated list of translations and other material that I couldn’t fit into the book. Click here to see more and find out how you can help!

Too often, the answer seems to be: ‘Jews wear black hats, black coats and have beards.’ Like this: 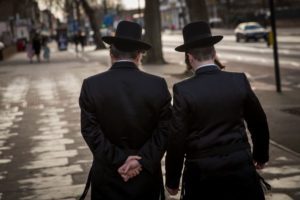 Of course, some Jews do like that, but the answer to the question ‘what does a Jew look like’ is much more complicated – and much more interesting.

What does a Jew look like? was born out of a collaboration between Keith Kahn-Harris and Rob Stothard.  They met when Keith tracked down Rob, who took the photo above for Getty Images; a photo that has been used and reused hundreds of times in the British media. Together, they set out to put together a broader set of images of British Jews.

This book of portraits  showcases some of the many different ways men and women can be Jewish in Britain today. Alongside the portraits, each subject explains what it means to them to be a Jew  – a kind of ‘self-portrait’.

For those who don’t know what a Jew looks like – or for those who think they know – the book is designed to surprise, inform and beguile. For those who are Jewish, the book will perhaps introduce parts of the Jewish community that they may not be familiar with.

Click here to read the foreword by Stephen Bush.

How did antisemitism get so strange? How did hate become so clouded in controversy? And what does the strange hate of antisemitism tell us about racism and the politics of diversity today?

Life-long anti-racists accused of antisemitism, life-long Jew haters declaring their love of Israel… Today, antisemitism has become selective. Non-Jews celebrate the ”good Jews” and reject the ”bad Jews”. And its not just antisemitism that s becoming selective, racists and anti-racists alike are starting to choose the minorities they love and hate.

In this passionate yet closely-argued polemic from a writer with an intimate knowledge of the antisemitism controversy, Keith Kahn-Harris argues that the emergence of strange hatreds shows how far we are from understanding what living in diverse societies really means.

Strange Hate calls for us to abandon selective anti-racism and rethink how we view not just Jews and antisemitism, but the challenge of living with diversity.

The Holocaust never happened. The planet isn’t warming. Vaccines cause autism. There is no such thing as AIDS. The Earth is flat.

Denialism comes in many forms, dressed in the garb of research proudly claiming to represent the best traditions of scholarship. Its influence is insidious, its techniques are pernicious. Climate change denialists have built well-funded institutions and lobbying groups to counter action against global warming. Holocaust deniers have harried historians and abused survivors. AIDS denialists have prevented treatment programmes in Africa.

All this is bad enough, but what if, as Keith Kahn-Harris asks, it actually cloaks much darker, unspeakable, desires? If denialists could speak from the heart, what would we hear?

Kahn-Harris sets out not just to unpick denialists’ arguments, but to investigate what lies behind them. The conclusions he reaches are disturbing and uncomfortable:

Denialism has paved the way for the recent emergence of what the author tems ‘post-denialism’; a key component of the ‘post-truth’ world. Donald Trump’s lack of concern with truth represents both denialism’s final victory and the final collapse of its claims to scholarly legitimacy.

How should we adapt to the post-denialist era? Keith Kahn-Harris argues that there is now no alternative to enabling denialists and post-denialists to openly express the dark desires that they have sought to hide. This is a horrifying prospect, but perhaps if we accept the fact of ‘moral diversity’ and air these differences in the open, we might be able to make new and better arguments against the denialists’ hidden agendas.

View a preview of the book here.

Diaspora Jews are no longer unified in their support for Israel.

The author explores the causes of the conflicts and describes his own innovative efforts at conflict resolution. Analysing the various groupings –  left, right, secular and religious, pro and anti-Zionist – in Britain and the USA, Keith Kahn-Harris looks at the history of civility in society and examines the different methods used by international organisations and groups involved in developing dialogue within Jewish communities.

He describes how using these techniques and with expert help, he brought together more than seventy prominent diverse British Jews for a series of encounters. He concludes that dialogue and civility is possible. But with no change in behaviour there will be serious consequences for the Jewish communities of the world.

For a group of people so limited in number, the Jewish community has had a huge impact on both global events and local politics. In this vibrant new look at Judaism, sociologist and cultural critic Keith Kahn-Harris provides a remarkably sharp insight into this history, and particularly the diverse Jewish communities (and diverse ideas of Jewishness) that exist today.

Can Judaism keep bouncing back?

Judaism: All That Matters is a fascinating new look at Judaism, in which sociologist and cultural critic Keith Kahn-Harris provides a remarkably sharp insight into this history of the Jewish people, and what it means to be Jewish today.

Kahn-Harris shows how and why the relatively small Jewish population has had such a huge impact on international events, local politics, economic development and global culture. He also looks at the fragmentary nature of Judaism today, and asks whether Judaism can continue to punch above its weight in the twenty-first century – and even if it should want to.

This accessible and concise book will appeal to both students and general readers, providing a fascinating introduction to Judaism – and what matters most about it.

Keith Kahn-Harris and Ben Gidley contend that there has been a shift within Jewish communal discourse from a strategy of security, which emphasized Anglo-Jewry’s secure British belonging and citizenship, to a strategy of insecurity, which emphasizes the dangers and threats Jews face individually and communally. This shift is part of a process of renewal in the community that has led to something of a ‘Jewish renaissance’ in Britain.

Addressing key questions on the transitions in the history of Anglo-Jewish community and leadership, and tackling the concept of the ‘new antisemitism’, this important and timely study addresses the question: how has UK Jewry adapted from a shift from monoculturalism to multiculturalism?

Extreme metal–one step beyond heavy metal–can appear bizarre or terrifying to the uninitiated. Extreme metal musicians have developed an often impenetrable sound that teeters on the edge of screaming, incomprehensible noise. Extreme metal circulates on the edge of mainstream culture within the confines of an obscure ’scene’, in which members explore dangerous themes such as death, war and the occult, sometimes embracing violence, neo-fascism and Satanism.

Including interviews with band members and fans, from countries ranging from the UK and US to Israel and Sweden, Extreme Metal: Music and Culture on the Edge demonstrates the power and subtlety of an often surprising and misunderstood musical form.

This book defines the key ideas, scholarly debates, and research activities that have contributed to the formation of the international and interdisciplinary field of Metal Studies. Drawing on insights from a wide range of disciplines including popular music, cultural studies, sociology, anthropology, philosophy, and ethics, this volume offers new and innovative research on metal musicology, global/local scenes studies, fandom, gender and metal identity, metal media, and commerce. Offering a wide-ranging focus on bands, scenes, periods, and sounds, contributors explore topics such as the riff-based song writing of classic heavy metal bands and their modern equivalents, and the musical-aesthetics of Grindcore, Doom metal, Death metal, and Progressive metal. They interrogate production technologies, sound engineering, album artwork and band promotion, logos and merchandising, t-shirt and jewellery design, and fan communities that define the global metal music economy and subcultural scene. The volume explores how the new academic discipline of metal studies was formed, also looking forward to the future of metal music and its relationship to metal scholarship and fandom. With an international range of contributors, this volume will appeal to scholars of popular music, cultural studies, and sociology, as well as those interested in metal communities around the world.

Heavy metal is now over forty years old and has developed into a diverse and multi-faceted genre. Wherever it is found and however it is played, metal’s fascination with transgression has often meant it has been embroiled in controversy. Controversies surrounding the alleged connection between heavy metal and, variously, sexual promiscuity, occultism and Satanism, subliminal messages, suicide and violence have made heavy metal a target of moral panics over popular culture. Metal has variously embraced, rejected, played with and tried to ignore this controversy and it remains irrevocably marked by its controversial, transgressive tendencies.

This anthology provides a thorough investigation of how and why metal becomes controversial, how metal ‘scenes’ are formed. It examines the relationship between metal and society, including how fans, musicians and the media create the culture of heavy metal.