Despatches from the Invisible Revolution 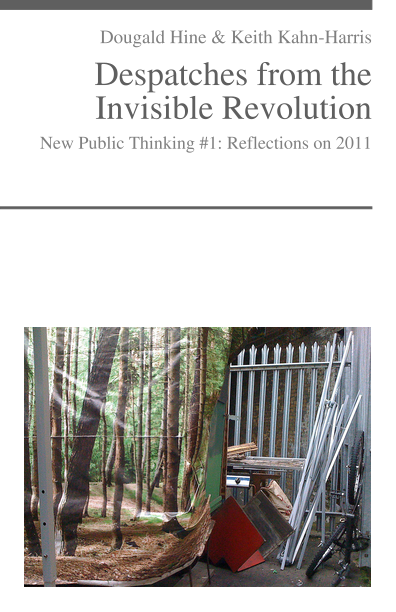 The book began as an invitation to reflect on the events of 2011: to make sense of the changes going on in the world and in our own lives, and to voice the questions the year had left us with.

From Wikileaks to the UK riots, Tahrir Square to Zuccotti Park, the headline events of the year all make their appearance, often from the perspective of those involved in or touched by them. Smári McCarthy writes about his experience as a Telecomix activist providing tech support to revolutions in Tunisia, Egypt and Syria. Keri Facer examines her responses after riots come to the street she has just moved into. But these images sit alongside the less dramatic events that make up the fabric of our lives, and between the two a pattern begins to emerge.

The idea of ‘The Invisible Revolution’ comes from Pamela McLean’s account of her work with ICT and community learning in the UK and Africa. The thing about the transforming power of networks, she says, is how hard it is to make people see it unless they have experienced it first hand. In the Industrial Revolution, you could point to a steam engine; pointing to a laptop or the Twitter home page doesn’t convey an equivalent sense of the power and strangeness of the forces at work.

In this and other senses, the book becomes a picture of life in the middle of an invisible revolution, interwoven with the hopes and bitter experiences of those visible revolutions left unfinished at the end of 2011. Some of its contributors see themselves as actively engaged on the frontlines; others are closer to the role Noah Raford proposes, as ‘system-repairing non-combatants and psycho-social medics, providing shelter for the shell-shocked around us.’

From this non-combatant role, another significant path runs through the book, concerning time and place, belonging, identity and the experience of being ‘at home’. In one sense, these concerns map the negotiation between our physical, embodied existence and the virtual qualities of the network. ‘We live in an age,’ write Jeppe Graugaard and Morten Svenstrup, ‘where it has become a life skill to balance the power and advantages of virtual time against embodied temporalities.’ But they are also markers of an emergent intellectual project, a kind of applied postmodernism which does not have the luxury of dancing with nihilism as its academic counterparts have done for decades. These are not polished pieces of academic theory, but there is thinking in progress here, and a style of thinking which does not hold itself above doing, or feeling.

A profusion of innovative projects guided by an ethic of collaboration holds out the possibility of creative responses to today's multiple crises, says Keith Kahn-Harris.

The early 21st century is marked by a profusion of initiatives that bring people together to discuss and explore big questions. It amounts to a great river of change - but to realise its potential the movement needs a formal designation, says Keith Kahn-Harris.