Extreme Metal: Music and Culture on the Edge 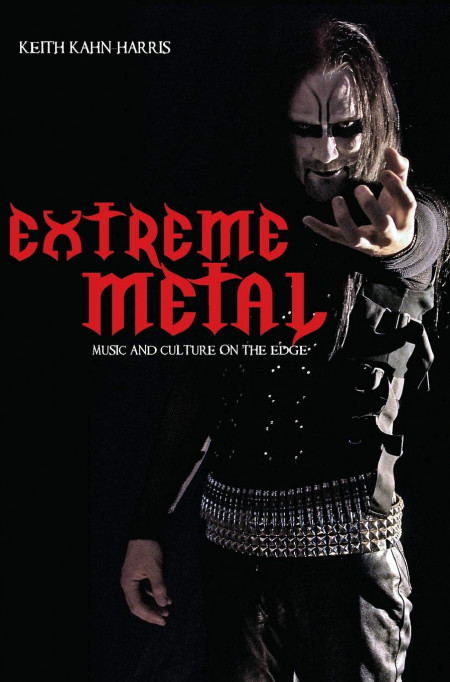 Extreme metal–one step beyond heavy metal–can appear bizarre or terrifying to the uninitiated. Extreme metal musicians have developed an often impenetrable sound that teeters on the edge of screaming, incomprehensible noise. Extreme metal circulates on the edge of mainstream culture within the confines of an obscure ’scene’, in which members explore dangerous themes such as death, war and the occult, sometimes embracing violence, neo-fascism and Satanism.

Including interviews with band members and fans, from countries ranging from the UK and US to Israel and Sweden, Extreme Metal: Music and Culture on the Edge demonstrates the power and subtlety of an often surprising and misunderstood musical form.

Reviews for Extreme Metal: Music and Culture on the Edge

Sharp, engaging, and comprehensive. Extreme Metal is a must-read for metal fans and anyone interested in the study of popular music and subcultural politics in a globalizing age

Kahn-Harris carefully negotiates his position as sympathetic intermediary and critical observer. Following a quotation from a Danish musician who simultaneously claims antiracist credentials while using racist language, Kahn-Harris notes: "The temptation would be to rely on an easy explanation for this quotation - that (the musician) is a complete idiot." He resists the temptation, and in doing so provides real insights into the margins of our culture.

As the first book-length academic study of extreme metal music and culture, Kahn-Harris's Extreme Metal is an important - and overdue - contribution to scholarship in this field

The scope of his work is magnificent and EXTREME METAL is destined to be the pioneering and definitive study of the topic.

Anyone desiring to read further on post-subcultural
thinking and the loaded issue of scene participation within late modernity, or, indeed,
anybody with a passing curiosity about the ‘fear-laden’ culture that is extreme metal,
will find much of interest within this book.

In Extreme Metal: Music and Culture on the Edge, Keith Kahn-Harris provides the most piercing critique yet of intolerance in extreme metal.

Extreme Metal: Music and Culture on the Edge is a
masterful analysis of an unfairly ignored subculture and musical genre; the book is sure
to become standard reading for those interested in the scene.

Metal music, developed in the sixties and seventies, is notorious for its dark and disturbing imagery and its aggressive sound. But there's nothing to be afraid of, says sociologist and fan Keith Kahn-Harris: it's all part of the mythmaking of metal.

Who holds the power in the extreme metal scene? Why does extreme metal produce so many contradictions and how can such a radical artform retain such earthiness? Jonathan Selzer got the answers to these questions and more from Keith Kahn-Harris, author of the far-reaching examination of the metal scene, 'Extreme Metal: Music and Culture on the Edge'

The ‘Failure’ of Youth Culture: Music, Politics and Reflexivity in the Black Metal Scene

This article examines an enduring question raised by subcultural studies: how youth culture can be challenging and transgressive, yet ‘fail’ to produce wider social change. This question is addressed through a case study of the black metal music scene. The black metal scene flirts with violent racism, yet has resisted embracing outright fascism. The article argues that this is due to the way in which music is ‘reflexively antireflexively’ constructed as a depoliticizing category. It is argued that an investigation of such forms of reflexivity might explain the enduring ‘failure’ of youth cultures to change more than their immediate surroundings.

‘Roots’?: The Relationship Between the Global and the Local Within the Global Extreme Metal Scene [published under the author name Keith Harris]

Music's ‘malleability’ (Taylor 1997) has always facilitated its export and import from one location to another. Indeed, such processes are central to the creation and dissemination of new musical forms. Yet in our contemporary globalised world, such processes occur ever more extensively and rapidly giving rise to new forms of appropriation and syncretism. Record companies from the developed world find new audiences in the developing world (Laing 1986). Musicians from the West appropriate non-Western music, sometimes collaboratively (Feld 1994; Taylor 1997). Non-Western musicians and musicians from subaltern groups within the West create new syncretic forms drawing on both Western and non-Western music (Mitchell 1996; Lipsitz 1994, Slobin 1993). The resulting ‘global ecumene’ produces considerable ‘cultural disorder’ (Featherstone 1990, p. 6) whose results cannot easily be summarised.

An edited version of this paper also appeared in A. Bennett, B. Shank and J. Toynbee (eds) The Popular Music Studies Reader, Routledge, 2005 pp128-136