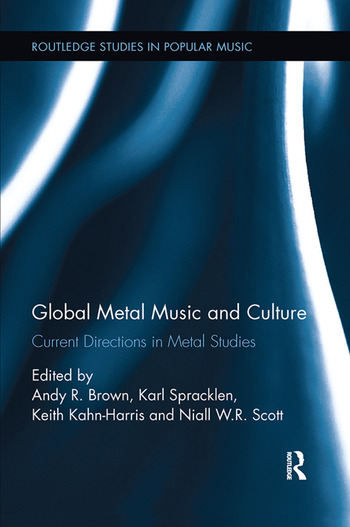 This book defines the key ideas, scholarly debates, and research activities that have contributed to the formation of the international and interdisciplinary field of Metal Studies. Drawing on insights from a wide range of disciplines including popular music, cultural studies, sociology, anthropology, philosophy, and ethics, this volume offers new and innovative research on metal musicology, global/local scenes studies, fandom, gender and metal identity, metal media, and commerce. Offering a wide-ranging focus on bands, scenes, periods, and sounds, contributors explore topics such as the riff-based song writing of classic heavy metal bands and their modern equivalents, and the musical-aesthetics of Grindcore, Doom metal, Death metal, and Progressive metal. They interrogate production technologies, sound engineering, album artwork and band promotion, logos and merchandising, t-shirt and jewellery design, and fan communities that define the global metal music economy and subcultural scene. The volume explores how the new academic discipline of metal studies was formed, also looking forward to the future of metal music and its relationship to metal scholarship and fandom. With an international range of contributors, this volume will appeal to scholars of popular music, cultural studies, and sociology, as well as those interested in metal communities around the world.

A Reply to Niall W.R. Scott and Tom O’Boyle

I am grateful to Niall W.R. Scott and Tom O’Boyle for taking my ideas seriously and engaging with their implications. As they recognize, my keynote at the 2013 conference, together with the selection of essays that followed it (Kahn-Harris, 2013; 2014), was intended to be a provocation and a stimulus to debate. While Niall and Tom take issue with some of my arguments, their piece is very much in the spirit of what I was aiming for. In some ways, Niall, Tom, and I are very much on the same page. In the final part of my series of essays, I suggest the concept of ‘Metal beyond Metal’ (Kahn-Harris, 2013g). This refers to taking metalness beyond the confines of what we currently understand as metal. Metalness here connotes the following:

I don’t know if Niall and Tom would necessarily sign up to this particular articulation of metalness, but I think we are reaching for the same thing: a future in which metal reaches out simultaneously in myriad different ( Deleuzian) directions at once. I found myself both excited and moved by the passionate way in which they uphold the possibilities of a transgressive and radical metal future. Yet, although I am struck by the similarities between our respective projects, I think there are significant and revealing differences in our relationship to metal today. Niall and Tom point out that my works to which they are responding are ‘not filled with empirical data to support his claims’ but I want to argue that, in fact, my piece is more grounded in an analysis of contemporary metal culture than may at first be apparent.