Foreword to ‘What does a Jew look like?’ by Stephen Bush 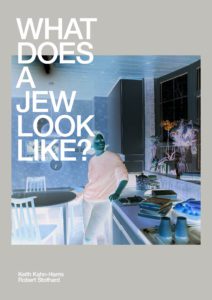 The book What does a Jew look like? was born out of a dissatisfaction with the use of stock photos of strictly orthodox Jews in the British media to represent all Jews. Stephen Bush, a respected journalist and author of a ground-breaking report on racial inclusivity in the British Jewish community, was a natural choice to write the foreword to the book. Here is what he wrote:

I am the author of this book. I don’t mean to say that I did any of the work, or the thinking, much less the writing, the organisation or the chivvying of writers and the gentle chiding about missed deadlines. Indeed, if I am being 100% honest, I have to admit that I myself added to some of that workload by missing my own deadline.

No, what I mean is: I am one of those awful journalists who has, in the past, illustrated a story about Jewish life in the United Kingdom with a picture of the Haredi community. I’ve made all the usual journalistic excuses: the desk wanted a picture, it’s hard to illustrate abstract stories, it’s harder still to illustrate stories about race or religion in a sensitive way, and so on. I’ve engaged in special pleading about the fact that, look, I’m Jewish, so of course I know that there’s more to Jewish life in twenty-first century Britain than living in Stamford Hill. (I, for example, am barely observant and live a whole twenty minutes’ walk away in Stoke Newington.)

These are poor excuses, not least because I’ve never hesitated to get annoyed when I see other journalists using the same old photo to illustrate a story about our community — even when it obviously doesn’t fit. (I once saw a picture about Jewish schools illustrated with a picture of three Haredi men, all of whom were visibly over fifty.) Of course, these are all bad arguments. The difficulty, we journalists like to explain, is that just as with, say, the care crisis, which isn’t solely about the elderly, it’s hard to illustrate the story without resorting to stereotype. Given that the one thing journalists like to do more than resort to easy cliché is to find an excuse to put a picture of a pretty young person in the paper, you’d think we’d leap at the chance to put a photo of our own choosing to illustrate a story about British Jewish life: yet we don’t.

It’s the ubiquity of the same old image to depict our community — in some cases, the same photo taken on the same day, pressed into service to illustrate stories on everything from literary prizes to street antisemitism to the ongoing problems in the Labour Party — that has inspired this collection.

And, as this collection illustrates, one reason why we shouldn’t use this photograph is that, while our strictly Orthodox communities are a big (and, unless the next census springs a very big surprise, the fastest-growing) part of British Jewish life they aren’t the only part. There’s no reason why we shouldn’t illustrate a story about British Jews with a picture of the traffic island at Golders Green, or a stunningly attractive young political journalist in the Stoke Newington area, for that matter. The story in these pages is of interesting, living and breathing people, with different ideas of what it is to be Jewish, with different journeys to feeling Jewish, who live in different parts of the United Kingdom and have very different lives. And they each deserve
representation.

But the other reason is that, as this book also shows, everyone deserves to have their own story told. A Haredi man, young or old, deserves better than to be used as a journalistic crutch to illustrate each and every story about communal life. A picture may tell a thousand words, but as this collection shows, those thousand words aren’t anywhere near as compelling as letting the subject speak, not on behalf of a whole community, but for themselves.