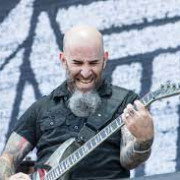 I have long been fascinated, as a fan and as a writer, with what it means to be a Jew within metal scenes. In this theme you can find my writings on this subject. In addition, for some years I wrote a blog called Metal Jew which focused on the intersection between Jewishness and Metalness. You can find the archive of the blog here.

Writings, talks and videos relating to Jews and Metal

Metal and the Holocaust: Too much transgression?

What do you do when you are drawn to the bad guys, but the baddest guys around are just too bad?

Heavy Metal and Renewal: Rosh Hashanah in the end times

How metal’s Christian apocalyptic sensibility can ground hope for a Jewish new year of renewal.

Engaging with absence: Why is the Holocaust a “problem” for metal?

While genocide, killing and transgressive acts of violence are common themes in metal, there is a relative absence of metal lyrics and other ways of engaging with the Nazi Holocaust of the Jews as a theme. This stands in contrast to premodern genocides that are often the subject of fascination. Even when the Holocaust is apparently ‘celebrated’ by neo-Nazi metal acts, some of the specificities of the genocide, together with its applicability to Jews today, may be elided and effaced. When the Holocaust is engaged with in non-neo-Nazi metal lyrics, it is usually with great care and the victims themselves are rarely mentioned. The Holocaust constitutes a ‘problem’ in metal that makes silence and absence a preferable option to engagement. The reasons for this lie in part in metal’s self-conscious avoidance of ‘politics’, the lack of salience of Jews and antisemitism, and the excessive nature of the Holocaust itself.

Metal, Jewishness and the Holocaust

Orphaned Land: the Israeli heavy metal band with fans across the Middle East

The band fuse Jewish and Arab music with heavier sounds, but they can't escape the contraditions at the heart of their homeland.

A series of posts from 2013 to 2014 in which I outline what 'Metal Beyond Metal' could look like.

How Diverse Should Metal Be? The Case of Jewish Metal, Overt and Covert Jewishness

My dream came true and I’m still not satisfied: the journey of a Metal Jew

‘A Tango Between God and Satan’

Includes interview about the film 'Anvil! The Story of Anvil'

Inside every seven stone nebbish of a diaspora Jew, there is a mighty rock god waiting to be liberated by heavy metal music

“I hate this fucking country”: Dealing with the Global and the Local in the Israeli Extreme Metal Scene

An Orphaned Land?: Israel and the Global Extreme Metal Scene